A picturesque, vibrant and diverse city in the Grampians region,renowned for its local arts community and key enabler of the region’s agricultural industry 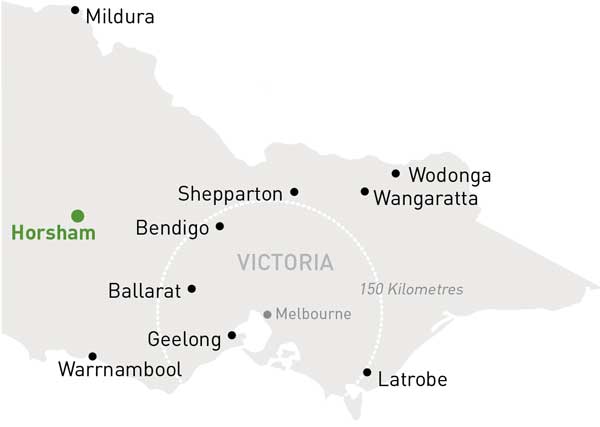 Horsham Rural City is a vibrant, diverse community situated approximately 300km northwest of Melbourne and north of the Grampians National Park, in the heart of the Wimmera region of Victoria. Almost three quarters of residents live in the urban area of Horsham.

Over the next 20 years Horsham is expected to experience notable population growth, setting it apart from other municipalities in the Wimmera. It is also the key service centre for the thousands of people that visit the nearby attractions of Mount Arapiles and the Grampians National Park each year.

Horsham Rural City Council is a regional leader in arts and cultural activity that celebrates diversity, creativity and inclusion. There are 27 languages (including English) spoken in the Municipality.

Horsham is home to a culture of many acclaimed artists and arts companies across the performing, visual arts, crafts, multi-media and literature mediums. There are eight established arts festivals within the municipality, which are all driven by the community.

Construction of a new major 500 seat performing arts centre and conferencing facility on the heritage-listed Horsham Town Hall site commenced in January 2014 and is expected to be open in mid-2015. The development includes an upgraded Regional Art Gallery.

Horsham has approximately 2,162  businesses and a workforce of around 10,065 people.

Health Care and Social Assistance is the primary employment industry in Horsham, followed by Retail Trade, Construction and Agriculture, Forestry and Fishing. In the five-year period 2015-2020, there was strong employment growth in Health Care and Social Assistance, Public Administration and Safety, and Informational, Media and Telecommunications.

The region is one of the world’s largest grain, pulse and oilseed growing regions and exports about 60 per cent of the total harvest. The regional economy is heavily reliant on agricultural production, which contributes millions of dollars each year to the Victorian economy and is fundamental to Horsham’s strength.

Horsham plays a leading role in the Wimmera’s agricultural industry, providing many of the support services necessary to sustain agricultural production as well as research, development and value-adding opportunities.

Horsham is strategically located at the junction of the Western, Wimmera and Henty Highways. The Melbourne-Adelaide railway line, which passes through Horsham and has the Wimmera Intermodal Freight Hub at Dooen, is part of the larger East-West corridor that includes the Sydney-Adelaide and Adelaide-Perth lines.

The RDV information portal has more detailed data and statistics on the Horsham region and regional Victoria more broadly.