Our Partnership has a range of priorities it is championing. Some of these have led to new initiatives in our region.

Read about some of these projects below.

The WSM Early Years Project: Giving kids in our region the best start

The Wimmera Southern Mallee (WSM) Regional Partnership Early Years Project, BY FIVE, is now up and running and aims to streamline and coordinate services supporting young children and their families in the WSM region.

The project came directly out of the Regional Partnership process, with the Partnership hearing from the community in 2016 the need to improve early years service delivery in the region where communities are often small and dispersed.

That message was taken to the Victorian Government and the Partnership was thrilled when the Premier announced support for the initiative at the 2017 Assembly.

Since then, the Partnership, along with the Department of Education and Training (DET), and the Department of Health and Human Services (DHHS), with support from the Murdoch Children's Research Institute, has been working to bring the initiative to life.

The project aims to explore and provide the very best early years learning experience for children in a regional, rural and remote setting. It involves testing new ideas and ways of operating within a place-based context. 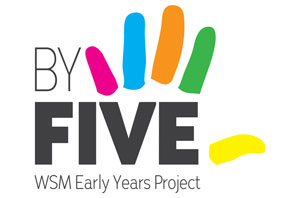 “‘BY FIVE’ was developed to build on existing resources and skills and ensure children in the Wimmera Southern Mallee have the very best early years learning experience,” explains Emma Vogel, Chair of BY FIVE.  “We called the project BY FIVE because it covers five geographic clusters within WSM and we want to see significant change on five developmental outcomes by the time children reach five years of age and start school.”

She adds, “This project brings together parents, carers, educators and health professionals that interact with a child during its first five years. The challenge is to design the best system for every child, irrespective of where the service comes from and how it is funded. The focus is squarely on the child.”

Over the past year, the five project clusters have been working with Karen Modoo, the BY FIVE project coordinator, and Rachel Robinson from the Murdoch Children’s Research Institute to map their local services as a child moves between parent, maternal child health services, childcare, kinder, health services, and school.

One of the clusters involved in BY FIVE is in the town of Dimboola where new parents will soon be able to pick up a booklet full of all kinds of useful information for raising a child in the town.

Local mum-of-twins Hannah Young is one of the authors of the new directory and says it would have made a huge difference for her had it existed when her children were born.

“I didn’t know anyone here,” explains Hannah, who had moved to Dimboola two years before Paddy and Bede were born in 2014.

During those two years, she worked as a secondary school teacher in Horsham. “I was never here in the day,” she explains, adding that she was “really isolated” when the twins arrived.

The Maternal and Child Health (MCH) nurse visited Hannah in her home and let her know about the town’s playgroup. “I was really hesitant to go,” explains Hannah.

The playgroup ended up becoming a huge part of Hannah’s life and she went on to be President. It was in part through this role that she came into contact with BY FIVE.

As part of BY FIVE, Hannah attended a series of training days in Horsham provided by the Bastow Institute. She – along with a kinder teacher, a social worker and two primary school teachers from Dimboola, and 85 others - attended the training.

“We identified that lots of professionals working with children and families travel to Dimboola from other towns and are not aware of the services available,” says Hannah. Out of this was born the new directory.

“We’ve put in a list of possibilities, things you can do in town,” explains Hannah. “We started with information on allied health services but expanded to everything. There’s info on domestic violence services but also when the library is open. We found a lot of services were based in Horsham but will come out.”

“This information was really lacking in our community. I spent a lot of time wanting to move to a bigger place,” says Hannah. “But had I known what was available here, that would have helped. It would have made a huge difference to me if I had known there was story time at the library.”

The Wimmera Southern Mallee Regional Partnership Digital Plan is an evidence-based, place-based analysis of the supply of and demand for digital services and skills in the region.

The Plan identifies gaps in the region’s current digital infrastructure and makes recommendations on how these gaps can be addressed.